THE husband who brutally attacked his wife and her lover with a tyre lever is not violent and remains a close friend, his spouse said today.

Robert Andrew Mann, 30, was yesterday sentenced to 12 months in jail for his vicious assault on Jaimi-Lee Atkinson, 26, and her then-boyfriend Jeremy Sampson. He had tracked them from the couple’s Tamworth home to Sydney using the Find My iPhone app.

Terrifying footage of the June attack shows Mann, armed with a steel rod, dragging a screaming Ms Atkinson out of a vehicle in a Parramatta car park before she runs away. He then leaned into the car and punched Mr Sampson up to 30 times, before returning his attention to his partner of 13 years. 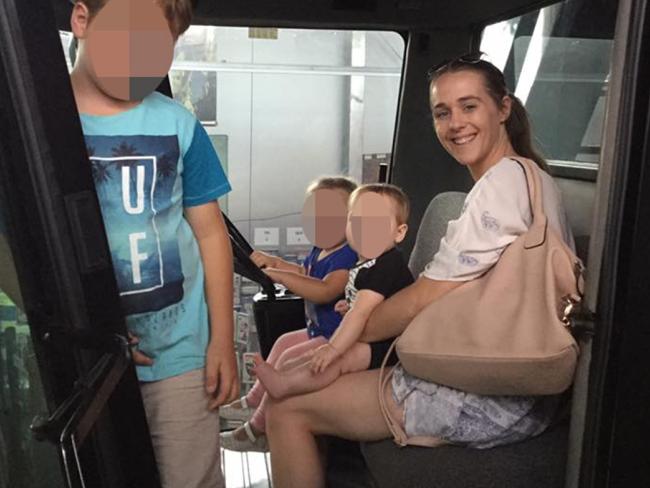 Standing over her, he shouts: “Thought you got away from me, didn’t you?”

Ms Atkinson can be heard begging bystanders to call the police.

The mother of five accompanied Mann to court, where he pleaded guilty on two counts of assault occasioning actual bodily harm, one count of intentionally destroying/damaging property and one count of driving on a suspended licence.

Ms Atkinson today told news.com.au: “Me and my ex are only friends. We will remain close friends. I’ve spent the majority of my life with him.

“Our marriage is over, too much has been done to repair our marriage, but for our children, the stuff that’s happened in our marriage isn’t their fault. We need to be there for them.

“People have made him out to be some kind of animal who bashed me and someone else and that wasn’t the case. He didn’t hit me.” 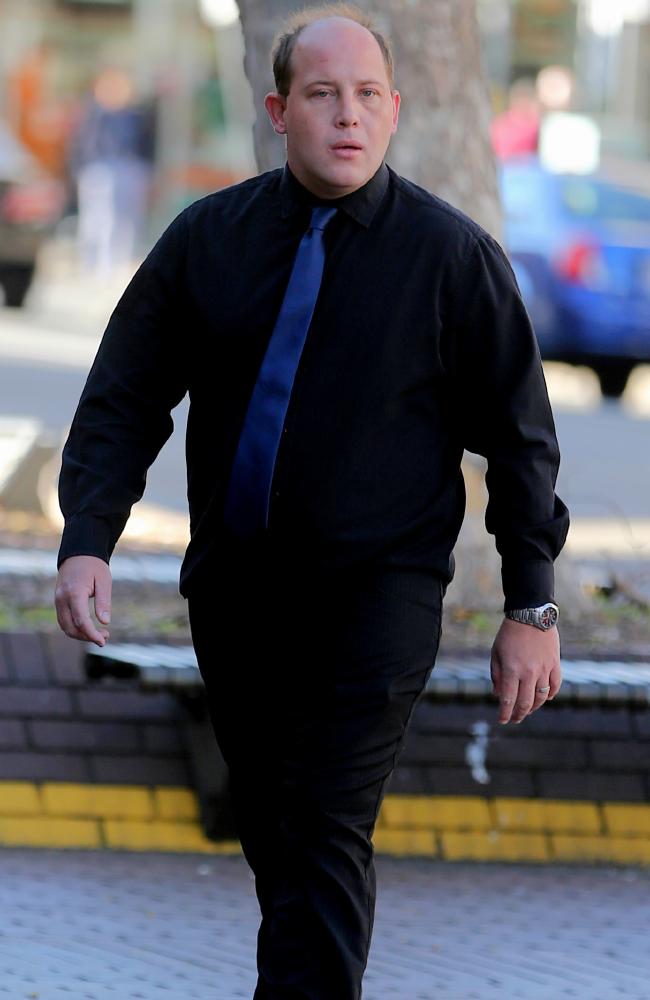 Asked whether she had been able to forgive her husband for the attack, Ms Atkinson said: “There is some sort of forgiveness there, but this story that’s been publicised through the media is not what happened. I don’t know where the media got that from. It’s a load of crock.”

She said reports at the time that there was an AVO (apprehended violence order) in place were inaccurate. “There was no domestic violence, no police involved. Robert was never an abusive partner or husband.

“I had a miscarriage, he was working away from home, long hours … I was basically doing it by myself. He was only home one or two days a week and when he was home, he was sleeping. It put a lot of pressure on our marriage. 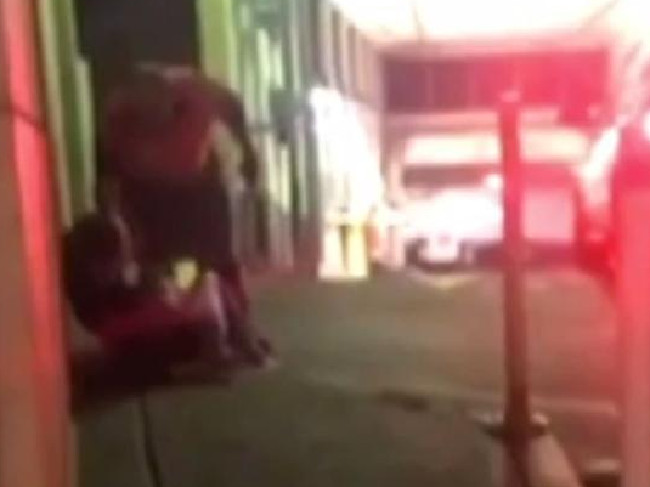 Robert Andrew Mann is heard shouting ‘thought you’d got away, didn’t you?’ in terrifying iPhone footage of the attack.Source:Channel 7 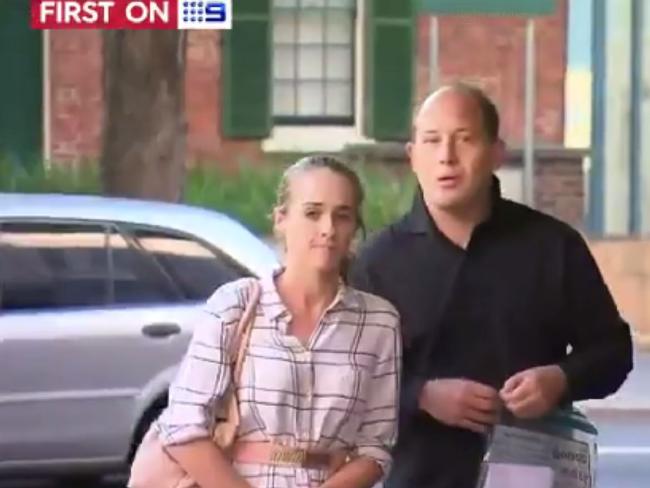 Ms Atkinson was by her husband’s side as he was sentenced at Parramatta Local Court yesterday.Source:Channel 9

“You can see in the video he was getting cranky there … the cut eye I got was from a broken window during the altercation between the two males. I was very scared about them fighting, like anyone would be.”

She and Mr Sampson were treated by paramedics after the attack before being taken to hospital. Police alleged that when officers later approached Mann, from Wee Waa northern NSW, they were verbally threatened and had to use a taser.

Ms Atkinson continued: “I haven’t been the best wife, I was being unfaithful to my husband. I was having an affair. There was three of us at fault … we’re all sorry for what happened that was publicised and people had to see that. Robert’s very sorry about what happened.

“My main priority now is my children and trying to deal with our personal things. It’s hard on them with their parents separating, without the news talking about all this.

“My son’s going to football training and people are talking about it. The kids knowing Robert, he was never like that … Robert’s not known as a violent person … that stuff never happened.

“My hope for the future is the best life for my children. We just want everyone to know the truth.”

Ms Atkinson said her husband, from whom she is now separated, regularly sees their five children, who are aged between 10 and just under a year old. He lost his job in the cotton industry after the attack.

The 26-year-old says it is too late for her and Mann to resume their relationship, but added: “I still care for Robert deeply, I will forever.”

After pleading guilty to four charges, Mann was sentenced to 12 months’ jail, with a non-parole period of six months, disqualified from driving for two years and fined $300, Nine News reported.

Magistrate Jenny Giles said: “You hunted these two victims, pursuing them across the state in a vengeful, rage-filled vendetta.”

Mann walked free after lodging an immediate appeal and will return to court next month.

What is an Independent Children’s Lawyer?

What is an Independent Children’s Lawyer?

An Independent Children’s Lawyer (ICL) is a lawyer appointed by the Family Court to represent the best interests of the child in parenting disputes.

Section 68L of the Family Law Act 1975 enables the child, as well as persons and organisations concerned with the wellbeing of the child, to apply for an ICL. The Court will usually appoint an ICL if one or more of the following circumstances are relevant:

What do Independent Children’s Lawyers do?

ICL’s take into consideration the views of the child and form their own opinion about what arrangements and decisions are in the child’s best interests. This may include:

What are the best interests of the child?

In family law the ‘best interests of the child’ has a very particular meaning. Generally, the following are considered in determining best interests:

What is the role of the Independent Children’s Lawyer in court?

At the hearing, the ICL will conduct the case on behalf of the child. They will make submission, present evidence and cross-examine witnesses.

When does the Independent Children’s lawyer make a recommendation?

When the ICL knows what orders they wish to seek on behalf of the child they will inform the parent’s lawyers, or the parents directly if they are unrepresented.

Sometimes the ICL may be unable to make a recommendation until late in the proceedings or not at all.

If the ICL makes a recommendation, it may be subject to change, based on the evidence made available to the Court.