Greg was my best mate. Knowing that I killed him … it’s left me with terrible feelings 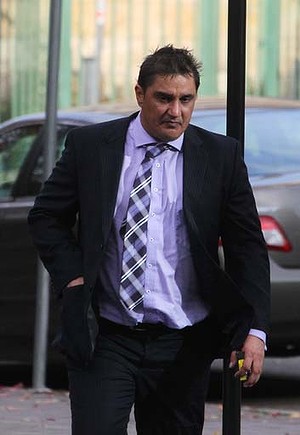 The thing about the death of Greg Wood at the hands of his best mate, Daniel Gray, is how easy it is to imagine someone you know in the same situation.
Think about the ragged end of a wild bucks’ night in the Sydney central business district. Only two men are left standing after hours of drinking and recreational drug use.
One of the men, Wood, a 33-year-old with a penchant for pushing the limits, has been hassling his mate, Gray, for hours to do something very stupid – to try heroin together for the first time. It’s a couple of days after New Year’s Eve 2009.

”The biggest mistake of my life was giving in to Greg’s persistent requests to go to Kings Cross and buy heroin, ” Gray says, speaking publicly about what happened for the first time outside the witness box.
After travelling to the city’s red-light district, where Wood buys the drug with ease, the two mates travel back to their cheap hotel and come to the bizarre conclusion that it will be safer if they inject each other.
Wood’s attempt, it seems, is unsuccessful, but Gray is able to tap a vein and sends the heroin home.
Within a couple of hours, it is clear something is wrong – Wood’s lips have begun to turn blue and he has stopped breathing.
Gray tries desperately to revive his mate, attempting CPR and then calling an ambulance, but it is too late. About an hour later, at about 11am, the ambulance officers stop pumping Wood’s chest and take him away.
”Greg was my best mate,” Gray says. ”Knowing that I killed him … it’s left me with terrible feelings … regret, sadness.”
Gray immediately confesses to ambulance officers and police what has happened, telling them: ”It’s my fault … I’ll call his mother and tell her.”
What follows is a protracted legal nightmare.
A coronial inquest into Wood’s death is called and it hears a moving statement in which Wood’s widow Kristen says that her husband was a compulsive risk taker and that she doesn’t want any further action taken against his best mate.
But, as District Court judge Ian McClintock said in sentencing the 39-year-old on Friday, it is the justice system’s job to uphold the law on behalf of the entire community, not just a few individuals. Gray is charged with manslaughter and, some months later, pleads guilty to the charge.
”I cannot express enough to Greg’s family how sorry I am,” Gray says. ”The effects of my mistake have left them without a husband and a father.
”I just want people to know the terrible consequences that can flow … from taking drugs. It will be with me for the rest of my life.”
On Friday, Gray was sentenced to a three-year good behaviour bond, meaning he will not spend a single day in jail over the incident.
McClintock said Gray had taken part in the incident out of a ”misplaced sense of loyalty and mateship” that had ”resulted in a very tragic loss of life”.
”The idea to use and inject the heroin was the victim’s own,” McClintock said. ”It was the deceased who initiated the process of obtaining the heroin … pressing the offender to accompany him to Kings Cross to purchase it.
”He negotiated the purchase and it was he who incited his friend to use it to satisfy his own appetite.
”In light of the very low moral culpability, a sentence of imprisonment would not be appropriate.”
Speaking after the decision, Gray’s lawyer, Hugo Aston, said he believed the good behaviour bond was the right result, but that ”obviously, no one is a winner”.
”When you look at the circumstances of this particular case and these particular facts, quite clearly this man shouldn’t go to jail,” Aston said.
”He just wants to go home, be with his wife and try as best he can to get on with his life.”